One of my this year’s holiday destination was the Philippines. I wanted to visit the country after reading, a few months ago, a reportage. It was describing people living there on the cemetery. It sounded terrible and made a big impression on me, especially because there were some moving photos assigned to it. I knew it was only describing the worst part of the country as well as the society that allows such things to happen.  Anyway I decided to check how life looks like on the islands. And moreover it’s a good destination for holidays, because it’s always warm there. Not only warm, cheap too!
Before going there I did a bit of a research, because of malaria existence in some parts of the islands, and my plan was not only staying in the capital. About Manila I can only say that I totally don’t recommend it. I heard a lot of bad things about the city, and these occurred to be true. Terrible traffic jams, lots of poverty around every corner, people wanting only to screw you, lack of sense of security and many other negative experiences about the city

However when it comes to islands, all went just fine 🙂
From the beginning now. I landed on an international airport in Manila and immediately flew to Tagbilaran, a city in Bohol, the island I spent some time on.  They impression about the airport is that the international one looks quite similar to all of the international  airports, however the domestic one is very tiny. There are only four gates, and so many flights taking off to all of the Filipino islands, that it is incredibly crowded and it is hard to find a place to sit. I had an impression of being kind of loaded to a plane and then taken to my destination. Apart from that the plane was on time, everything went smoothly, just the size of the airport and amount of people crowding there was stunning.
About Tagbilaran and Bohol island I can only say good things and I really enjoyed my stay there.  The island is connected by two bridges to another one – Panglao that has to offer many interesting beaches. Mostly the islands are about the beaches. When you are on holiday, in a warm country, on an island, you usually sunbathe and rest by the ocean. Both islands, Bohol and Panglao, offer scuba-diving, trips around the area and many touristic  attractions. I went on a daily trip where in the scope I had attractions like:     sightseeing of Chocolate Hills – a very popular spot in the island located in the middle of it. They do make an impression as the view is amazing when you climb one and then have a view around others. Then we were taken to a place where I could see some small monkeys, later on there was a cruise on a river Loboc with lunch on a boat! Next stop was crossing the bridge made of wood, that was really moving when you’re walking on it, visiting  a zoo where I could hold and touch a snake! I really touched it, even though it was terribly scary. There was also a quick stop in the middle of a forest, just to take some pictures as the trees there are incredibly tall what is impressive. There was one thing for people who like to have their adrenaline flowing quickly in their veins 🙂 As far as I recall it was called Zipo-line. You could cross or rather fly from one spot to another. You lay down,  are being  zipped in a straitjacket and just fly between two hills seeing a stream just below and incredibly green landscape of forest around. I did it! It was fun, it was safe, it was good 🙂 If I could I would do it again and take my mobile with me this time to register the view. The whole trip took one day, from 10 AM until 6 PM. In my opinion it was totally inexpensive. To be driven by van, quite a modern one, to all of the above mentioned spots, the trip cost 400 pesos – that is about 7 euros!!! For the entrance to all of these places I had to pay additionally. That day I spent around €25 and my day was full of attractions! 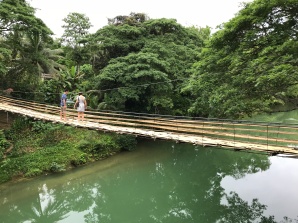 When it comes to Bohol itself, I need to admit I felt safe there. Nobody cheated me, nobody wanted more for a taxi that it should be, nobody harmed me. I did not catch malaria! Before going on holiday I went to a doctor who told me in the Philippines there is malaria. It sounded as if was to catch it immediately if I do not take the drugs she prescribed me. Anyway I did the research on my own and then decided that I’m not going to ruin my liver and take these pills. First of all they are incredibly expensive and  do not guarantee you will not catch malaria, they only guarantee when it happens, you will not die. I checked the WHO website to see how malaria issue looks like in the region I was going to visit. Then realised there’s no point taking the pills.  Most of the time I was going to spend on a beach anyway.  I always listen to myself and I always try to be reasonable. In that case the decision I made was a good one. So if you are planning to visit some Filipino islands, not going on a mission, staying in hotels and not in the middle of forests, I do not think taking pills against malaria is necessary.
When it comes to the beaches on these two islands I need to say they were not that impressive.  They look okay, quite pretty, and the view is totally amazing. However there are so many shelves by the coast, that you need to be careful when you are getting into the water. The water was really clean and just sitting by the ocean and admiring the view was something I will always remember 🙂 Was it a big WOW? Not it was not, it was just nice. 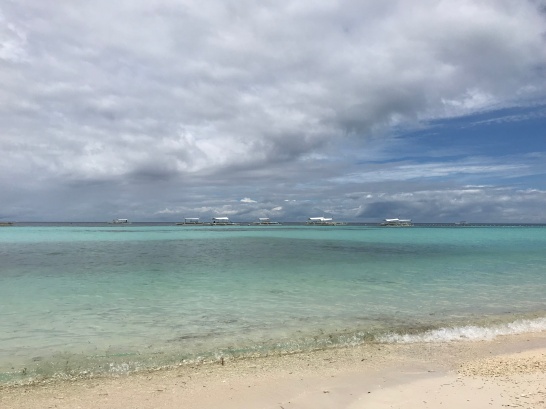 In my opinion the islands are really good spots to go on holiday, if you want to relax, enjoy good food, feel okay, and get yourself into a real holiday mood. I’m not a person that would look for trouble or hang out after dark, or get drunk, taking into consideration the fact I am travelling alone. During the day, on the beaches and in the city everything was okay. 100% safe. However I can’t say the same about the capital. I really don’t like Manila and don’t want to come back there. It was because I got cheated by a taxi driver and I do not like the fact of taking advantage of me just because I am a tourist. I do understand that the country is cheap, because it really is, but it doesn’t allow its citizens to cheat. That’s unfortunetely what happens when you travel in underdeveloped countries. It did not happen on the islands. I think it is because the islands are very touristic and they usually live from tourism, even the internal ones. In Manila however I paid four times more for a taxi that I should have. First of all what I’ve learned about the taxis is that you take a white one, because they are metered. The yellow ones are usually the ones that have no meter and can take whatever price they want. So be careful. I even  heard a story of taking from a passenger, for quite a short trip, around 2000 peso. That is a lot, about 40 euros! I only paid 600 instead of 150 I should’ve. The taxi’s meter was running like crazy. 10 euros for 15km ride is not a lot some may say, and I agree, but I don’t agree with the fact that the local would pay four times less what I paid, just because I am a tourist. Overall I am happy I only stayed one day in the capital. Honestly there is nothing to see there, except for the poverty that you see on every corner and the traffic jam. A good thing was that I met a great person from Couchsurfing. We spent a lovely evening in the Mall of Asia chatting about life over a meal.

Overall about the Philippines my impression is that it is a good place to go. If you’re going to one of the islands, or to some of them, skip Manila. The country is cheap, you can have a really good rest for not a big amount of money. I think it is one of the cheapest countries I have visited so far!
One thing that made me wonder and started to be annoying after a while was the fact that the Filipinos were always calling me ma’am. Is that because they were colonised by the Americans? Is that because they felt inferior to me? Is that because they wanted to be polite? Is that because that’s how they show respect to another person? I still don’t know the answer to this question. Sometimes when I was shopping and paying for the groceries in the shop or other stuff I’d prefer to hear a simple “thank you” than “thank you ma’am” as if I was a madam myself not a tourist and a normal human being. 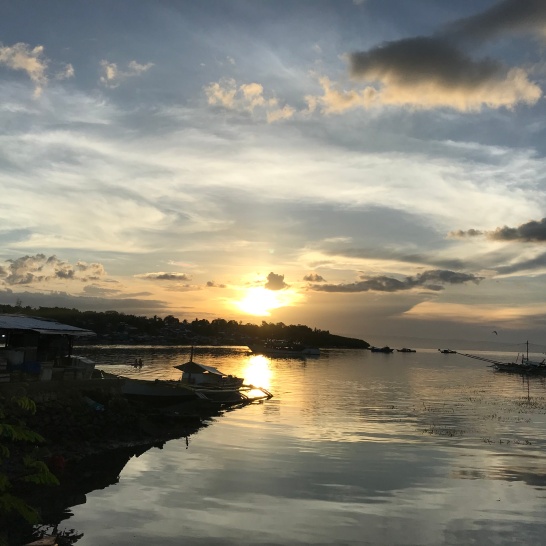