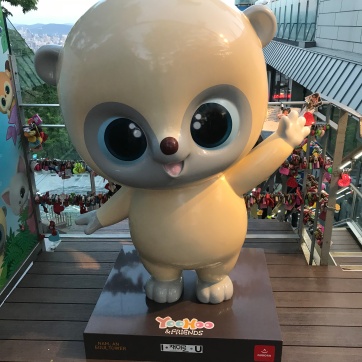 Why am I so in love with South Korea? And why this country is just incredible?! Is it because of people I met there? Or the landscapes? Or of what it has to offer? Or how amazing it is sightseeing a city that is so modern and in the same time it had so much of ancient culture and architecture? This whole mixture makes it one-of-a-kind. And I’m definately coming  back there, next year, for sure! I’m planning it already 🙂
It is funny how much I fell in love with the country, especially that my trip started in the most terrible way it could have. I was landing at 11 PM, late, I know. Yet I wasn’t afraid of landing that late, because I knew the country is a safe one, so even if it happens I need to wander around in the centre looking for the hotel I booked, or any other place I need to look for in the middle of the night, nothing will happen to me. I didn’t know the biggest problem will happen at the airport! So I landed, got my language, exit the area and then looked for an ATM as I needed money. And then problems start

It was already Sunday night, as when I got my baggage, it was around midnight.
It occured there was only one ATM working at the moment as there was some maintenance being done on others. And the only one working there was not giving me money! Thefirst thing I did was to call the bank I have account in, and they said everything was okay from their side – would they say anything else? I went then to the information center and they said there might be some problems because of the maintenance time. I did not want to take the taxi to the hotel as I prefered to take the night bus. I hate paying for things I do not really need. Anyway for the bus I could only pay by cash (that I did not have) or use their trasportation card, that of course I did not have as I just landed in a foreign county

I had some money to exchange, but because it was late, all of the currency exchange points were closed.
In the meantime my hotel reservation was cancelled, to my big surprise. I have no idea why booking.com cancelled it just because I did not show in the hotel

So once I got such an information by mail (the Wi-Fi works just perfectly at the airport!) I called the hotel, explained my issues and asked if I still can check in probaly around 3 am. They were fine with it. What made me angry and sad was the fact that at the airport there is only ONE (!!!) company providing ATMs service. As the ATM was not giving me money, and it was to others, I asked the information lady if there are some different ATMs around the area. To my surprise the answer was there are none

So it is Sunday, midnight, I am in such a well developed country, and I have problems withdrawing money at the airport! What the f*** is that? Can you imagine how surprising that was?!
So I took a taxi, had no other choice apart from staying at the airpot till 5 or 6 am untill the day life begins. I prefered to check in to the hotel, so I asked the driver to pull over near one of the ATMs that I could withdraw the money in a different ATM, and see if it is a problem with the card or there is another one. A different ATM also didn’t give me the money

Now this whole situation made me a bit nervous. Anyway,  I started thinking logically, what I always do and try to find a solution. I was able to pay for the taxi by card, I could pay for the hotel by card, so why couldn’t I withdraw the money? So instead of going to sleep I was thinking if I am able to get some money in this so-freaking-well-developped country? And the next day, instead of starting it from sightseeing, I had to figure out how to get the money! Fortunately I found, quite close to the hotel I was staying in, the branch of the bank I have account in and their ATM gave me money 🙂  Thank you Citibank, I love you too 🙂 Thinking in advance, I took a bit more that I needed, just in case, because I was not sure if any of other ATMs would give me money. I did not even want to try them again.
By the time I solved my problems it was already past midday. Finding a locker on the central station was a challenge that day because all of them were booked. So I was wandering around the city with my backpack. Fortunately it was only around 11 kg what wasn’t that bad, just a bit inconvenient. And because of it I was moving a bit slow

That day I did not see much of Seoul.
At 8 PM the whole crappy situatuion changed as I met my hosts who appeared to be just amazing! We met in the center, they took me to their flat and I spent a great evening with them. They showed me on the map all of the places worth seeing in the city and they were absolutely right! I need to add they were also incredibly prepared for hosting people. There were so many tour guides in the room they offered me for 2 night I could really choose from 🙂 They occured to be such great people that they will stay in my heart for ever 😉 Because that day I was not able to see much of the Seoul, the next one I woke up early, left the flat at 8:30 in the morning to have the whole day on the sightseeing. So I did 23 km by foot and I’m sure I haven’t even seen half of the city that I fell in love immediately! I can only say: I love, love, love it!

I love the palace I saw, I love the stream in the centre I walked by, I love all of these skyscrapers around, I love the Seoul Tower and its view, I love the markets I went to, I love the village I went to, and I just love every single spot I saw! I even went on one of the bridges as I like admiring a city from their view. And it did not disappoint me 🙂 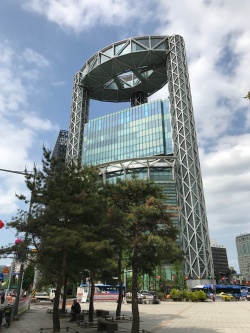 So even though the beginning of my South Korea trip sucked, with every single day being there I was loving the country even more! I knew if I did not allow bad emotions to stick to me, it will only get better 🙂 and it did!
And I had some lovely stars on the ceiling when I was sleeping! 🙂 Thanks to my hosts, of course 🙂

They occurred to be the best ones, so welcoming and wanting to share a piece of their life with a stranger, that means me. Meeting such people makes me continue my Couchsurfing adventure and because of them I know the website is the right place for me to be in 🙂  I’m very happy and grateful I had an opportunity to meet people like my lovely Seoul hosts! I know if you are a good person, you only attract good people 🙂 I tested it myself so can guarantee it works 😀
My next destination in South Korea was its second biggest city – Busan. South of the country and by the ocean with a nice beach, and going there by train was only about three hours. Ticket price 50 euros. And what’s funny is that nobody even checked if I had one on the train 🙂 In there I spent only one night, anyhow I managed to do a bit of sightseeing and meet a girl I hosted two years ago! Another Couchsurfing surprise 🙂 That’s amazing there are people staying at your house and then it might happen in the future, that in fact you meet them again. So we just grabbed some coffee and a cake. It was nice to see her again in a different place 🙂

In Busan and by the ocean there is a lovely park I had a walk and a nap 🙂 It happens to me that I take naps in different cities when I travel. I did it already in Rome, Nice, Thessaloniki and probably much more 🙂 The coastal view is incredible! Check it yourself 🙂 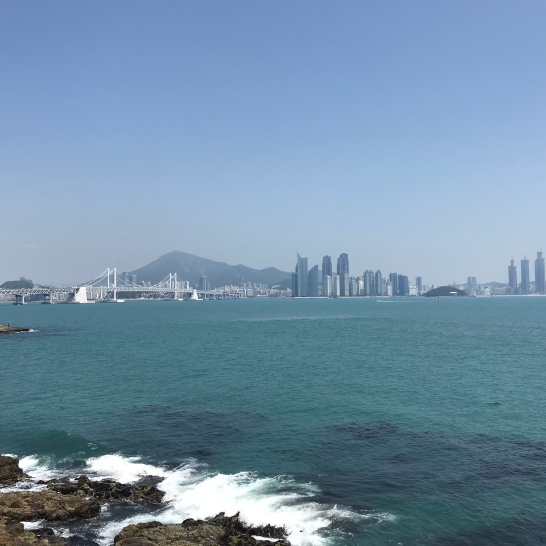 Some tips now:
1. In Busan I had no problems finding a locker for my luggage and they were available on every subway station. It costs 5000 won for the whole day. The machine was taking only banknotes of 1.000. Listen now: there was also a machine at the station exchanging you money to 1.000 banknots. How great is that? How thoughtful of Koreans is that? Do I find it in Europe? No way 🙂 How come not loving Korea even just for that? 🙂
2. The transportation card is centralised, so the one I had from Seoul also worked in Busan. I love Asian inventions a lot!!!
3. If it happens you land at night – get some money before heading to South Korea. I could have exchanged some before, yet I thought that in such a developed country I will not have any problems. How foolish of me that was! Lesson learnt 🙂
4. Their English level? Totally fine. And the people are amazingly helpful. Even if they sometimes might struggle with their communication, they will always help you. They did when I got stuck in the subway and the gate did not want to let me go 🙂 It occured that one way ticket was not enough for the trip I did. The same as in Taiwan – the subway charges you for the kilometers you do, so one way tickets may not always be enough.
Summing of the trip, I need to say that these four days were quite intense, surprising, amazing and not enough! I am really planning of coming back to South Korea next year. I want more of it! I want all of it! Next time maybe I will manage to visit Jeju island? Who knows? The plan is ongoing 🙂
Is the country expensive? For me it isn’t. Of course I did not expect it to be cheap. If you compare it to Vietnam, or Thailand or the Philippines it is much more expensive, but still, in my opinion, very affordable.
Something for the girls – the cosmetics they offer are of really great quality and totally inexpensive. My luggage was 11 kg when I was beginning my Asian trip and only because of Korean cosmetics it got into 16 kg 🙂  so the plan for next year is to come back for more cosmetics 😉
And I want to see more of Korea – that’s for sure! For me the country in a mixture of Japanese and American style. It is not that strict as Japanese are, yet well-organized and functioning in order. Plus it has this chilled out American mood. At least that is the feeling I had once being there. And I love such feelings! See you soon Korea 🙂

traveler and observer View all posts by Anna

One thought on “South Korea Love”